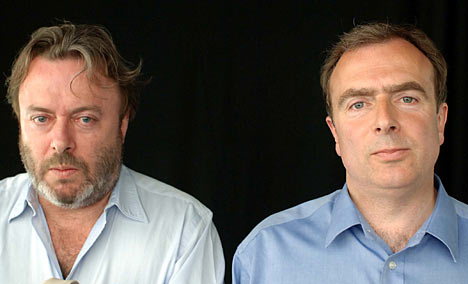 UPDATE: NPRs Religion Correspondent Barbara Bradley Hagerty was a panelist at the Hitchens Brothers debate. She was my guest on Wednesday, October 12 at 5:05 pm ET.

Yesterday in Washington, DC a lunchtime “debate” (billed as a “conversation”) was held between noted Atheist Christopher Hitchens and his Evangelical Christian brother, Peter. The question on the table was whether or not civilization could survive without God. The debate was sponsored by The Pew Forum on Religion and Public Life.

There used to be a word which could be used unironically. People meant what they said when they said the word Christendom. There was a Christian world. Partly evolved, partly carved out by the sword, partly defended by the sword, giving way and expanding at times. But it was a meaningful name for a community of belief and value that endured for many, many centuries. It had many splendors to its name, but it’s all gone now.

[In] huge parts of what we might call the industrialized modern world, tens of millions of people live in a post-religious society. It’s hard to argue that they lead conspicuously less civilized lives than their predecessor generations. I don’t think it’s really true to say that we live less civilized a life than those of our predecessors, who believed there was a genuine religious authority who spoke with power.

The behavior of human beings towards one another has sunk to levels not far from the Stone Age. How has this decline come about in civilization?

Well I think it has come about, a least partly, and I’m not a single-cause type of person, but at least partly there is no longer in the hearts of the English people the restraints of the Christian religion that used to prevent this type of behavior. I think it would be completely idle to image the two things are not related.

The extraordinary combination which you in this country and I in mine used to enjoy, and may for some time continue, of liberty and order, seem to me to only occur where people take into their hearts the very, very, powerful messages of self-restraint without mutual advantage, which is central to the Christian religion.

One Reply to “The Hitchens Brothers Debate”