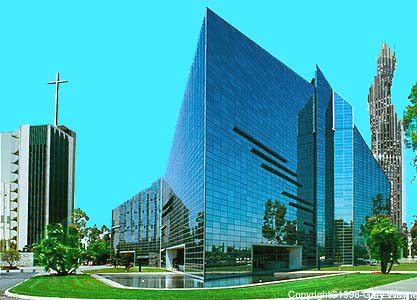 Angie Schuller Wyatt is the granddaughter of the founder of Crystal Cathedral Ministries, Robert H. Schuller. Her father, of course, is the younger Robert A. Schuller who was ousted as Senior Pastor of the Crystal Cathedral in 2008. Since that time the church has been embroiled in financial controversy which has led to bankruptcy and the sale of their property.

In an article at The Christian Post this week, Angie Schuller Wyatt points to her father’s siblings as the reason for the Crystal Cathedral’s troubles:

In one respect, this human metaphor falls short. The Crystal Cathedral isn’t a person, it is an institution. As such, its problems were not terminal. They could have been solved. My father attempted to fix these problems during his short tenure as senior pastor. He saw the Crystal Cathedral was headed toward bankruptcy. He attempted to restructure the board, cut his sibling’s salaries and establish fiscal responsibility. For these actions, he was fired by the board, which consisted of . . . you guessed it, his siblings.

His siblings fired him because they wanted to control it and had been brewing for some time. Apparently, they thought they could do a better job. They were clearly wrong. Oddly enough, they believed they were more “anointed” than my father. That’s not an assumption; they actually told him that his sermons weren’t anointed. I know from other conversations, and from watching media interviews with Sheila Coleman, they thought God would bless them for taking over the reins.

Clearly, time tells all. God didn’t honor them or their actions.

Through their religious self-absorption, they convinced themselves they were “spiritually superior.” And in the process, they made a public mockery of Christianity and the Crystal Cathedral. A 50-year old institution that helped countless millions lay to waste.

This self-absorbed conviction, a toxic lie, prevented them from reaching out to my father for help. Had they stepped aside and put the Crystal Cathedral’s heir apparent back in the pulpit, I am positive my father would have rebuilt rapport with the congregation, audience and supporters. The Crystal Cathedral could have been saved.