Paul is guest hosting God321 for his friend Dan Hutchins today, Friday, and most of next week, heard locally in Detroit on AM 1500 WLQV and from anywhere in the world at www.faithtalk1500.com.

On today’s program Paul will share the “Refiner’s Fire” that he has passed through since leaving his position as WLQV’s afternoon host. Also, Paul Washer warns American Christians that persecution is coming. And Paul talks about his Hindu friend, Basin, who showed up at Paul’s church asking to know more about Jesus.  They are now studying the Gospel of Mark together. Here’s a picture of Paul & Basin: 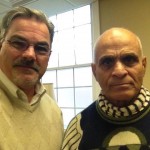