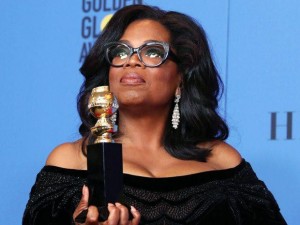 Oprah is a religion. A false religion. She has created an industry worth billions of dollars by propagating a New Age Humanism that has dethroned God and put the Self in His place, a religion epitomizing Lucifer’s rebellion against the Most High God: “I will exalt MY throne above the throne of God.”

Her’s is the secular prosperity gospel, with a broader reach and more insidious appeal than that of her next closest competitor, Joel Osteen.

In accepting the Cecil B. DeMille Award at last night’s Golden Globes, Oprah cited decades old racist acts – despicable acts that took place 74 years ago – as if those kinds of attitudes and actions are still mainstream in contemporary American life. They are not.

She propagated the idea that the male gender cannot be trusted. She told all the little girls watching that they live in “a culture broken by brutally powerful men.” We do not.

In the mainstream of American life and commerce, there are many powerful men who go to work every day, who move the economic engine of America forward, without brutalizing anyone.

The Hollywood culture is indeed broken by “brutally powerful men.” But it is also broken by sexually powerful women – the Delilah’s who have abused their own sexual power. Most of the actresses attending last night’s gala apparently cannot afford a blouse. Or a bra.

In her raucous rallying cry, Oprah preached that there is no such thing as THE truth – only YOUR truth. That is a lie. Oprah wants you to exchange the truth of God for a lie. The lie is whatever you – or she – or the media – wants the truth to be.

I was aghast. And I’m even more aghast at the almost immediate media deification she received – though I’m not surprised.