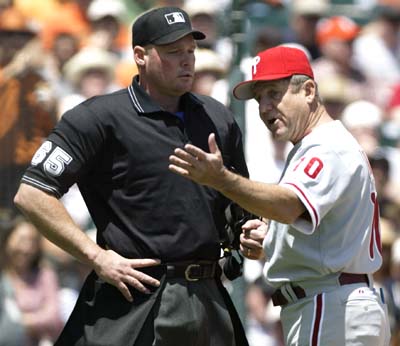 ST. LOUIS, Mo. (BP) — He’ll be on the field for every game, right in the middle of the action, but he won’t throw a pitch or take a swing.

Ted Barrett feels the pressure nonetheless. He knows the stakes are high when the World Series starts tonight between the Texas Rangers and the St. Louis Cardinals. But while the players will all be doing their utmost to leave their mark on the Fall Classic, Barrett and five other guys hope that nobody even knows they are there.

“All eyes are on the game,” said Barrett, one of the six umpires working the series. “The biggest fear is for something to happen where you become the story.”

That means no mistakes for Barrett and his five crewmates. It means no controversial calls that have haunted umpires like Don Denkinger (who missed a crucial call at first base in the 1985 World Series) or Jim Joyce (whose blown call cost Detroit Tigers pitcher Armando Galarraga a perfect game in 2010).

Such is life for a major league umpire. When they do their job perfectly, they get no accolades and no praise. When they mess up, they get unending ridicule, scorn and maybe even death threats from legions of fans.

But his job on the field isn’t the only place where Barrett likes to deflect attention. As a Christian and one of the founders of the ministry Calling for Christ (CFC), Barrett ultimately hopes that his actions point to Jesus.

“My sole purpose is to glorify God,” Barrett said. “Whatever happens, if I can walk off the field and glorify God, then I’m in.”