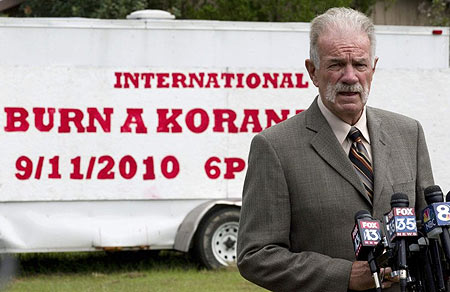 Former Oakland County, Michigan Prosecuter Richard Thompson says that the Wayne County prosecutor’s call for a $100,000 “peace bond” before Pastor Terry Jones can protest outside a Michigan mosque is an effort by the City of Dearborn (MI) to curtail the minister’s free speech rights:

There is a statute that allows “peace bonds,” but in this case it seems that the statute is being used to curtail Terry Jones’ free speech rights. In my view using it in this way violates the First Amendment to the Constitution. It imposes special prohibitions on Terry Jones.

Thompson went on to say:

What is ironic is that we have some people in foreign lands that get upset because Terry Jones burned a Koran so our reaction is going to be in the United States, we’re going to burn the Constitution. That’s basically what we are doing.

It’s not Terry Jones who is taking action to curtail someone’s Constitutional rights or commit a crime, but their concern is that someone might commit a crime against Terry Jones, so they’re making Pastor Jones pay for it. It’s just the way they want to intimidate this Christian pastor from exercising his free speech right to condemn Jihad…Dearborn has a history here of curtailing Constitutional rights whenever it becomes critical of Islam.

One of the ironies is here is that there is a counter demonstration planned against Pastor Jones.  Where Pastor Jones says he is going to have a few people at his speech, [the counter demonstrators have] indicated to the City of Dearborn that they are going to have anywhere from 500 to 1,000 people at the counter demonstration. I haven’t seen any kind of request for a peace bond in that situation. So you have a double standard already that is being proposed by the City of Dearborn. It shows me again that they have a double standard whenever Christians are involved in free speech in that city.

The full audio of the interview with Richard Thompson is here: