For Rob Bell or anyone else to suggest that we believe people will suffer eternally in hell for not believing in a Jesus of whom they know nothing is a distortion of what we affirm, and worse still is a distortion of what Paul clearly taught. People will be held accountable and judged on the basis of the revelation that God has made of himself to them. And this revelation is unmistakable, unavoidable, and sufficiently pervasive and clear that the failure to respond as well as the turn to idolatry renders them “without excuse.” 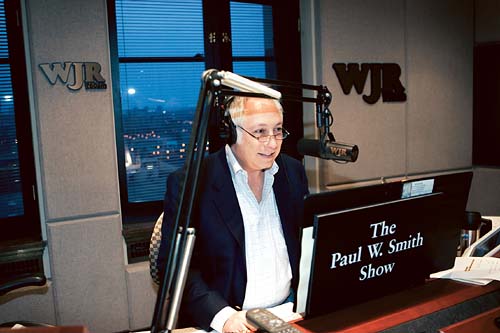 Rob Bell continues to avoid conservative evangelical media, choosing rather to sit for brief interviews with personalities who no doubt have been vetted to ensure that another “Martin Bashir Moment” doesn’t catch Bell with his pants down.

On Monday, April 4 Bell spoke for 9 minutes to Detroit’s popular morning personality Paul W. Smith on WJR. While Smith made a pretense of asking one tough question, he completely let Bell get away without answering it:

Paul W. Smith: “Your “hell” would be “hell on earth,” not the traditional hell that’s supposed to keep us in line because we’re worried we’re going to hell when we die.”

Rob Bell: “You know, in the book I tell this story: There’s a woman I see each Sunday at church…each week she walks up to me, she hands me a piece of paper. The piece of paper is folded in half. And then she smiles and then she walks away and then I open up this piece of paper and on it is written a number. And the number is the number of days since she last cut herself. And she just recently celebrated one year without cutting herself. And so for me, I want her to know that she’s loved, that she matters. I want her to be a part of our church where she has people who are supporting her as she works through her wounds from the past and she experiences healing. So that’s to me, that’s the good news. She needs to hear it. I believe lots of people need to hear it. We have enough suffering in our world, and I think Jesus calls us to do something about that suffering to come along side those who have been kicked to the edges and try to bring some heaven to earth.”

Bell never answered the question. Paul W. Smith moved on to tell him how impressive his church is and to ask Bell about something Bell said to him off-air before the interview:

Paul W. Smith: “Now what is the original Christian message you were alluding to, because I’m not sure  what you meant?”

Rob Bell: “The central thing that Jesus announced to people was that God is on their side. This comes up again, again and again in Jesus teachings. He says things like, ‘God causes it to rain on the  righteous and the unrighteous,’ which is basically saying God is kind and good to all sorts of people, people who don’t even deserve it. So Jesus calls us to this fundamental gift of life that God has given us. And this God who created the world, who called the world good, is for us. This was Jesus’ announcement again and again.  And people in his day, there were lots of popular ideas about how God is against us, God is angry with us, God is going to crush us, burn us, torch us, whatever. And Jesus said, ‘No! God is for you. Trust me on this'”

Of course the reason why Rob Bell is doing interviews with interviewers like Paul W. Smith is 1) a mutual friend of both of them set it up (I’m speculating), and 2) Bell’s publicist vetted the interview to insure there would be no theological challenges to the nonsense Bell spews.

An interviewer with a foundation in biblical theology would have pointed out to Bell that he is clearly confusing “common grace” with God’s salvific or saving grace and the text Bell cites is in the part of the sermon on the mount where Jesus is giving moral instruction on loving one’s neighbor – the ones that are easy to love and the ones that are difficult to love – because God gives no distinction in offering blessings which are common to all, though unmerited.

This was a very difficult interview to listen to, not because once again Rob Bell made a fool of himself, but because Bell used one of the finest morning programs in Detroit to propagate his propaganda…and Paul W. Smith stood there like the house by the side of the road.

Listen to the full interview here:

In the words of Phil Johnson, it is “both hilarious and poignant.”