The reviewer nails the fact the story only presents the dark side of the gospel, something I told director John Curran when I had lunch with him. Here are the significant graphs:

Throughout the film, we hear snippets from the steady diet of talk radio Jack favors during his commute. Prognosticators offer doom-and-gloom assessments of the moral and financial health of the United States. A preacher speaks about man’s inability to save himself, quoting Romans and Revelation. What Jack’s listening to is going to his head.

Early in the film, he tells Stone that if he wants to be released, he needs to go through Jack. Pointing to the world beyond the prison, Jack shouts that he’s the door to the outside: “I’m that door! You will go through me!” Late in the film, the radio preacher quotes Rev. 3:20, in which Jesus says, “I stand at the door and knock. If anyone hears my voice and opens the door, I will come in.” When Stone challenges Jack to stop judging him, Jack brushes it aside.

There will be justice for Jack, but watching his life crumble provides no comfort or message of hope. In the end, Stone comes across as deeply cynical about religious faith. It’s true that, as the radio preacher says at one point, none of us can choose to be born again, but watching a man’s life slowly unravel because of his lack of true faith doesn’t offer many moral lessons. True believers succumb to temptation all the time, but they know the answer is to repent and renew their commitment to their Creator. Watching a man who doesn’t understand this spiral out of control may be one way of displaying the gravity of sin’s consequences, but it’s only one side of the coin. As it is, Stone feels like a half-truth, and that’s not good enough.

“Stone” could have been some sort of a procedural, a straightforward crime movie, but it’s too complex for that. It is actually interested in the minds of these characters, and how they react to a dangerous situation. De Niro is so good at playing a man who has essentially emasculated himself because of fear of his anger, so that sex and anger may be leashed in precisely the opposite way, as in “Raging Bull.” And Norton, the puppetmaster — it may not even be freedom he requires, but simply the pleasure of controlling others to obtain it.

The closest Stone gets to directly tying itself to the times comes through its soundtrack, which layers excerpts from conservative talk radio (bombastic hosts bitching about Obamanomics, listeners calling in to discuss “this angst that a lot of people are feeling in this country”) onto the score.

Jack’s failing is nominally one of the flesh, yet it’s spiritual and moral deep-rot that truly plagues him, with AM-dial Christian radio blather providing an incessant backdrop for both Jack and Stone’s dual quests for deliverance.

And seems to imply that by making “Christian talk-back radio” a key plot element, Christianity is portrayed in a negative light:

[Director John] Curran mentioned that the film’s near constant use of Christian talk-back radio as part of the soundtrack was a late addition because the director felt that De Niro is a very closed actor who didn’t reveal much about his character’s internal mental or emotional landscape, and Curran couldn’t find music that would cue the audience into what Jack (De Niro’s character) was thinking and feeling.

And then this in the “Discussion Starters” at the end of the review:

Taking into account not just Jack but also his wife and the inclusion of the Christian talk-back radio, what is the film’s attitude toward institutional religion? What is the difference, if any, between portraying Christianity in a bad light and portraying individual characters who claim to be Christian in a bad light? Which, if either, does the film do? 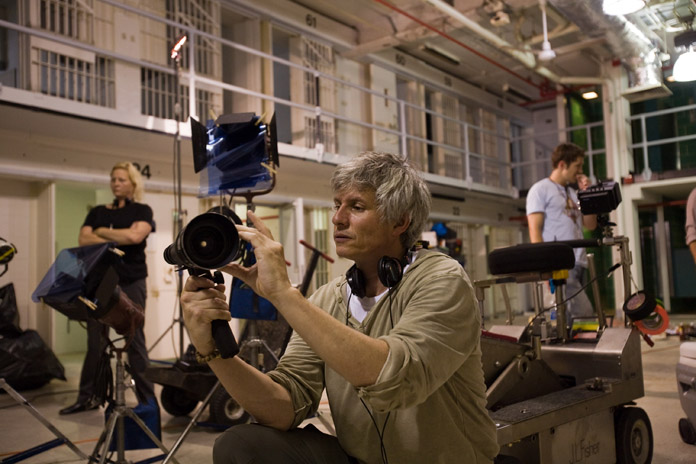 Steve Prokopy, Chicago Editor of Ain’t It Cool, reviews Stone. I’m including his entire review below because he gets it.

The scene opens with a flashback to 30-some years earlier, with a young couple sitting quietly at home. The husband is watching golf on TV, the wife is making him a drink, as she has clearly done hundreds of times before. Somewhere in the house is their infant daughter. After preparing what she believes will be the last drink she’ll ever make for her husband, the wife announces that she’s leaving him. He is in disbelief, but rather than attempt to talk her out of it or understand her reasons, he runs upstairs to where their child is, grabs her, and dangles her out the second-story window. He’s clearly upset, but the words he speaks put the burden of keeping their daughter alive on his wife. “Don’t make me do it,” he screams, not in anger but desperation. It doesn’t take long for the wife to agree to stay.

Jump ahead to the present, when we see this same couple, much older now, played by Robert De Niro, as Jack a parole officer, and Frances Conroy as wife Madylyn, both of whom go through the empty routines of religion and life together. Jack is nearing retirement at the suburban Detroit prison where he works, and his last case is with a young convict nicknamed Stone (Edward Norton), a hard ass to be sure, but a man who seems willing and motivated to improve as his first parole hearing approaches. Their meetings are some of the best moments of acting I’ve seen all year, especially from De Niro, who hasn’t been this sustained amount of good in a movie in easily 10-15 years. His gift is dialing it back and playing Jack as a guy who has seen and heard it all from the prisoners that parade before him day after day. He clearly despises each and every one of them, but there’s something different about Stone, something that challenges him and makes him a little vulnerable.

It doesn’t hurt that Stone’s wife, Lucetta (Milla Jovovich), has been hounding him to see if there’s anything she an do to improve the chances that Jack will recommend her husband for parole. Jack avoids her at first, but her undeniable beauty and overt sexuality eventually overwhelm Jack, who has never known, let alone talked at length to, a woman like Lucetta. And without too much effort, the two start sleeping together, and Jack’s world goes into a tailspin. A more obvious film would have turned this story into a classic blackmail tale in which Lucetta and Stone force Jack to approve Stone’s parole so they don’t tell Jack’s wife about the affair, but Stone is a much better movie than that. This is a film interested in the inner workings of its characters. Stone finds religion–as many prisoners do–but his conversion seems genuine. His questions about God and forgiveness and sin hit a chord with Jack that underscore the guilt he feels for the affair. The question that Stone keeps asking Jack is a variation on “What, you’ve never done anything wrong in your whole life?” And immediately, your mind flashes to that opening sequence. Jack is as much a prisoner and bully as Stone is.

Director John Curran (We Don’t Live Here Anymore and The Painted Veil, which also starred Norton) keeps a necessarily tight rein on De Niro and Norton, and the result is staggeringly strong performances from both, with De Niro reminding us that he’s the master of the nuanced, detailed performance. Jack’s every nervous tick and inability to express emotion is layered across De Niro’s furrowed brow. I’d go see the film again, just to watch him work; it’s been a long while since I’ve felt that way. Norton counters by being a little more brash and crude, but that’s completely appropriate for this prisoner with corn-rowed hair and a long-time inmates speech patterns and choice of four-letter words. The joy in Norton’s performance is the transformative qualities we see in Stone. He may have been attempting to placate and fool Jack in the beginning, but in pretending to be a better man, he actually started to become one, almost by accident, by simply thinking about his crimes.

The film’s genuine surprise is Jovovich, who is rarely given the opportunity on screen to exude her inherent sexuality like she does in Stone. She comes onto her husband on her visit to the prison one minute, brings home a stranger from a bar that night, and seduces Jack as methodically as one might plan a bank robbery. She’s a decent enough action star, but put her in scenes with some of the planet’s best actors, and she rises to the occasion.

Stone is a film that asks risky questions about what makes a person good or bad. Does going to church make you better than someone who doesn’t? Does admitting your guilt and paying your debt to society make you a worse human being than someone who simply never got caught? At what point in a person’s life are they beyond redemption? These are weighty thoughts to ponder, and Stone isn’t afraid to put them right in your face to consider them. Great acting and a compelling story–hey, that sounds like a movie worth seeing. Imagine that.