Variety: Whoopi Goldberg Suspended at ‘The View’ After Holocaust Remarks

John Podhoretz: Drop the Goldberg Name You Co-Opted, Whoopi – You Don’t Deserve It

Aaron Renn’s professional career has been mostly as a management consultant. He is not a theologian, but he is a Christian who has written an insightful essay for First Things Magazine wherein he posits a framework for understanding the relationship between the church and the culture since the 1960s.

Aaron joins Paul on today’s episode of the Recovering Christian Mind Podcast to discuss the reality that secular culture holds a negative perception of Christians (especially conservative evangelicals) and what we might do about it.

Connect with Aaron on Substack: https://aaronrenn.substack.com/

Read Aaron’s Essay at FirstThings.com: The Three Worlds of Evangelicalism

In his book, “Woke Racism: How A New Religion Has Betrayed Black America,” John McWhorter provides one of the most cogent responses to date to the visceral “woke mob” which has been muffling America’s civil discourse on race since before the killing of George Floyd in the summer of 2020.

In episode one of this new God & Culture Podcast, “Recovering the Christian Mind,” Pastor Paul Edwards laments Professor McWhorter’s comparison of the woke mob to Christianity. McWhorter does so in order to make a broader point – a legitimate one – that the woke mob are motivated and animated by the tenants of a new religion. But Pastor Paul fears that Christians – especially of the conservative evangelical variety – will be so put off by this comparison, they will not get passed it to see the legitimate points about “woke racism” Professor McWhorter is making.

The First Episode of our new weekly podcast drops on Monday, January 24th.

Dr. John McWhorter’s Woke Racism: How a New Religion Has Betrayed Black America is one of THE best responses to the woke mob I have read to date. It’s a masterclass on how to respond to the social justice warriors who intimidate us into silence on social media by calling us “white supremacists” and racists when we dare to challenge their idiocy.

Professor McWhorter posits that the woke mob are not advancing an ideology or political agenda, but a religion. To prove his point, he compares the dogma and practices of the woke mob to Christianity, and throws Christianity under the bus in the process (McWhorter, it should be noted, is an atheist.

Many Christians might respond with outrage to his aligning their beliefs and practices with those of the woke mob and totally miss the broader point he is making.

How do we think Christianly about Professor McWhorter’s (mis)characterization of the Christian faith while at the same time affirming his arguments about the woke mob?

The link to the first episode of Recovering the Christian Mind will post here on Monday! 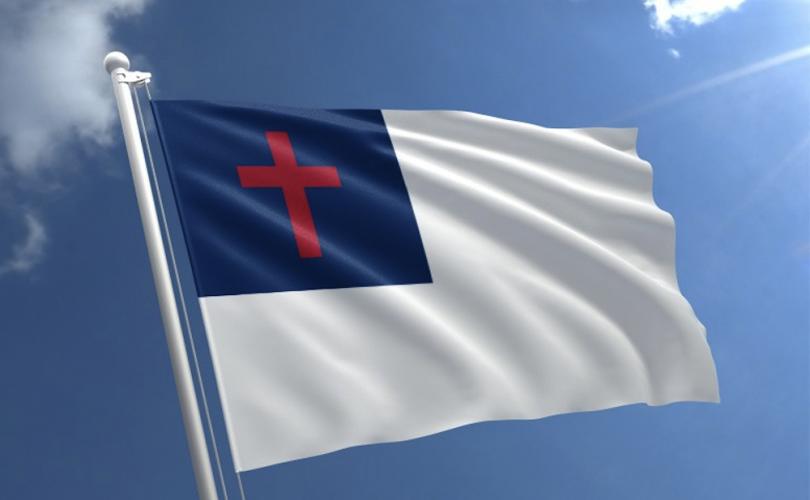 Christians have a flag, too.

As a Christian pastor, I would not be in favor of the Christian flag flying in front of the Executive Building, though given that most citizens in our county identify as Christians, one could clearly make the argument that there is more warrant for flying the Christian flag than the so-called “Pride” flag.

Neither flag should be flying on government property. Each of those flags highlights the differences between our citizens rather than those things we share in common. Though most of our citizens identify as Christian, you would readily agree that flying a Christian flag on government property would be an affront to our Muslim, Jewish, Atheist, Agnostic, and other non-Christian citizens.

Flying the Pride flag in front of our Executive Office building divides us in the same way.

Let me be clear, I have offended this holy God, too. My offenses may be different than yours, but they are as much an affront to God as yours and warrant the same judgment.

Which is why I am overwhelmed that this holy God, whom I offended and continue to offend, sent His Son Jesus into the world, who lived a perfect life – never offending this holy God – and died a death He didn’t deserve to die so that sinners like me could be spared the judgment all sinners deserve. My hope of averting God’s judgment rests in the fact that His Son has already endured God’s judgment in my place. He has exchanged my offenses for His perfection. We all stand in need of the same forgiveness, no matter the difference in our offenses. God has made this forgiveness available to all who desire it simply by asking Him to include us in it.

You don’t see your lifestyle as an affront to God. I understand that.

But many – if not most – of the citizens of Oakland County do see the LGBTQ lifestyle as an affront to God.

By flying your Pride flag in front of our Executive Office Building, you make a political statement which only serves to further divide. In the name of all that is holy, please take down your Pride flag.