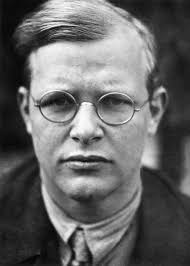 “Christianity stands or falls with its revolutionary protest against violence, arbitrariness and pride of power and with its plea for the weak. Christians are doing too little to make these points clear rather than too much. Christendom adjusts itself far too easily to the worship of power. Christians should give more offense, shock the world far more, than they are doing now. Christians should take a stronger stand in favor of the weak rather than considering first the possible right of the strong.”

Deitrich Bonhoeffer in a Sermon on II Corinthians 12:9